Tekashi69 Escorted Out of AOD Last Night in Revealing Video

Tekashi 69 is quickly escorted out of Ace of Diamonds in WeHo after an incident that was close to turning into a brawl. The video footage from TMZ that we have clearly shows 69 aggressively throwing cash over in the strip club only to have a shot glass chucked at his crew. The glass hit the girl standing next to him in her boobs and she fired back by chucking her glass back in the crowd. Yes, one person was injured. A clubgoer revealed that her eye was cut in a recently relea

Pusha T has made it clear that he is here to end Hip-Hop superstar Drake. T’s recent diss track towards Drake, titled The Story of Adidon, goes onto attack Drake in many forms. T targets Drake over the epic instrumental to The Story of O.J. by Jay-Z, which comes as a very interesting move on behalf of Pusha T as The Story of O.J. was not only a controversial record, but it also found Hip-Hop legend Jay-Z targeting Kanye West. Makes you think whether or not Pusha T is attempti

Young Jonas Kilpatrick is calling for his fathers freedom in his new music and video. The former mayor of Detroit is serving 28 years in federal prison for racketeering, wire fraud and mail fraud. Doughboi JoJo speaks on the lack of black fathers in households and is seen standing in front of the Supreme Court with "Free Kwame" shirts on. "Too Much Time" drops just days after the "Free Kwame" campaign. Check out the website here FREE KWAME CAMPAIGN LISTEN HERE

If you're active on social media you can probably recall a few short clips over the years of Jada sitting down at a red table and discussing certain issues or life lessons with her daughter, Willow and Mother Adrienne Norris. Which she entitled "Red Table Talk" for obvious reasons. Recently Smith has turned the show into a full on vlog! In her most recent episode release Smith sits down with fellow actress Gabrielle Union to discuss how she became the best version of herself

Former Lion's star Joique Bell will be hosting a free football camp Saturday, June 2, 2018 from 10AM until 1PM. Joique Bell Charity has hosted this camp for 8 years in a row now. He goes back to his hometown and gives back with this free event-training, engaging and teaching the youth. If your child is 8-18 years old and interested, click below to register. REGISTER HERE

Afro Beats have become very popular in todays music scene. Many people have taken a huge interest in music of the African diaspora. In the spirit of that here are my top 5 Afro beat songs for the week. 1. Soco - Starboy (feat. Wizkid, Ceeza Milli, Spotless & Terri): Released in 2018 after his sold out shows in Lagos. Starboy A.K.A. Wizkid dropped this banger and it has continued to trend and is currently number 4 in the country. Wizkid has been known amongst fans as a hit ma 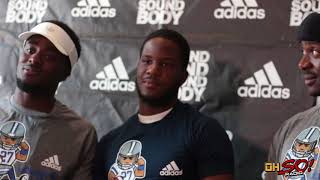 Football players that make it into the NFL defeat every odd that stands in their way. The statistic of making it into the league gets smaller with every child that makes it their dream. That’s why NFL cornerback Jourdan Lewis made it his prerogative to encourage the over 200 young football players that attended the Wide Receiver vs Defensive Back Skills camp at Detroit Pal Headquarters. “I’m trying to give as much as possible”, said Lewis. “ If they take one thing aways from

The Older The Better?

It’s no secret that woman seem to be attracted to older men and men seem to be attracted to younger women. The streets are talking. Not about this topic in general but about a couple for certain. Lil Wayne’s precious and prized, only baby girl has grew up. Reginae Carter a.k.a NaeNae is currently dating rapper YNF Lucci. She’s dating a rapper. Ofcourse we all seen it coming because women are usually attracted to what their father is. No big deal right? Media, spectators and f

Cass Tech Number 1 Second to None! It's a proud time for all Cass Tech students and alumni as beloved English teacher Vicki Green and her family represent for what seems like all of us on Family Feud. Some may remember when Green announced that she auditioned for the hit game show when they held auditions in the city and the excitement they felt when she shared to her many Facebook friends of students new and old that she was headed to California for round 2. Or when she shar

Those who still watch award shows were reminded last night that Hip Hop and R&B aren't dominant genres in the music industry. While popular artists like Post Malone and Kendrick Lamar dominate Rap and R&B categories, but when they're thrown into a game of numbers with Pop and Alternative the strength of their fan base is really put into perspective. Ed Sheeran and Taylor Swift won for Top Male and Female artists, Drake received top Billboard 200 artists and Kendrick Lamar cle
1
23