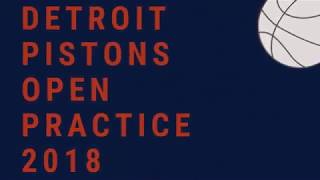 It has been a big week for community at Oh So Radio. Last Sunday, our Detroit Reception Challenge came to life for LaQuint and Janae Rhodes, as our couple walked down the aisle for the second time and got it just right.

But earlier last week, our very own Detroit Pistons closed out the preseason with two games (1-1), but first held a Fantasy Basketball Camp for Special Olympics. This is the third year that the Pistons have done the event, and they too got it just right.

The Disability Network was also present at the event representing our disabled community, and encouraged us at Oh So Radio to present to Michigan Primary Candidates Forum to break down issues focused on people with disabilities and seniors, this Friday October 19 at Considine-Little Rock Family Life Center.

On October 9, Magic filled the gymnasium of Cass Technical High School as Coach Aaron of Jr. NBA was joined with Detroit natives and retired basketball legends, Earl “The Twirl” Cureton and John Long. The three lead the event for the young athletes and gave them each their own official customized Pistons jerseys. Each jersey boasted the number 0 and the young athlete’s last name.

Following the excitement of the new swag, they played some Pistons Trivia, where the athletes got a chance to answer questions demonstrating their Pistons knowledge, and win a Jr. NBA t-shirt. Hooper, the Pistons mascot played along and encouraged the children to keep guessing as they did enthusiastically.

After their brains were warmed up, next came the basketball drills. The young athletes lined up and ran agility exercises in preparation for the shooting and dribbling exercises to come. The stations were manned by none other than Pistons rookie Bruce Brown, and the man whos number the athletes wore, Andre Drummond.

The gymnasium erupted in roars of applause as Andre Drummond and Bruce Brown entered smiling ear to ear. Andre threw his arms up in the air as he walked over to the children lined up, as they asked if he remembered them and gave him hugs and kisses.

“Being a global ambassador for the Special Olympics, it’s truly important for me to come out here and really show these kids how much I care about them and represent them everyday,” Drummond told Fox 2. “It feels good to be a role model to them, and show them each and every day that hard work pays off. And you can do anything you put your mind to, no matter the circumstances.”

With his success as a professional athlete at first glance people may see someone who always had it made, but that is not the case when it comes to Andre. He revealed that from a young age he fell behind academically, struggled with learning, and often was left out or made fun of as he stood out with being much taller than his classmates. He resonates with the kids on a personal and relatable level that he owns and uses to inspire.

“It’s pretty cool to see my own number with their names on the back [of the jerseys]... I’m sure it means a lot to them to have a professional jersey with their name on the back, so for them to have my number really means a lot to me… not everybody has the opportunity to do that,” Andre told Randi Rossario in an interview. And just as Andre demonstrates off the court that no obstacle is too challenging to overcome, the team as a whole has demonstrated that their own hard work over the summer will pay off this season.

The Pistons began the season with a home opening victory against the Brooklyn Nets with a 103-100 win at Little Caesars Arena last night. Blake Griffin led as top scorer with 26 points, 7 rebounds, and 6 assists. Andre Drummond had 24 points, 20 rebounds, and Reggie Jackson had 19 points, and 4 assists.

Oh So Radio is excited for all to come this season and encourages the community to continue making strides against all odds. In media, sports, and personal conquests.